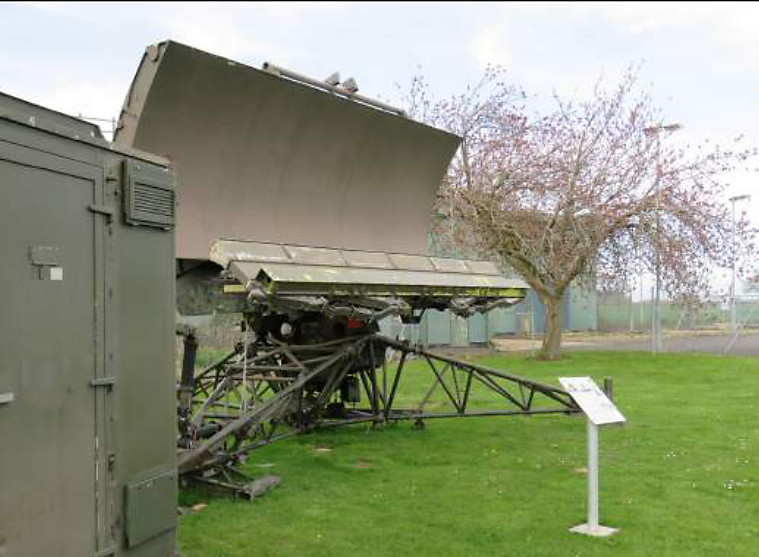 Dave Lowry and Grant Grafton of the RAF Fighter Control Association asked me several months ago if any Marconi Veterans might have photos of the interior of the S600 and S259 radar control cabins owned by the Air Defence Radar Museum at Neatishead in Norfolk (photo of the S600 right). Their requests were directed initially to MOGS, which has yielded some fruit - a couple of photos of the S600 cabin have been sent, but any further information/photos on both would be welcome. In another email a couple of weeks ago Dave Lowry gave some interesting information about the ADRM's S600.

Both his earlier request and that of this January follow.

I am searching for copies of any photos of the inside of the Control Cabin of an S600 Radar. I am a trustee of the RAF Air Defence Radar Museum based at RRH Neatishead near Wroxham, Norfolk. Our website is www.radarmuseum.co.uk

We have an S600 antenna and the engineering cabin which is virtually complete. We have an empty cabin which could be converted to a control cabin but, currently, the door is at the side and would need to be moved to the end. We also have many bits and pieces of the internals of a control cabin, including consoles. These were from Bushey and kindly donated to us. I am an ex-Fighter Controller and was very much involved in '82 in getting the S600 down to the Falklands and set up (see photo), initially, on Canopus Hill. Later it moved to Mount Kent.

We are renovating the S600 and wish to reconstruct the control cabin using the equipment we have and fabricating the supports etc. For this our volunteers, who have worked on the S600 when still serving, need a few good photos as a guide. My memory would not be sufficiently accurate. It was a long time ago.
Have any of your veterans have any such photos? It would be very helpful if you could scan them and email to me.

In January 2019:
Its the radar that went down to the Falklands that is at the ADRM. Anything involving that particular model would be of interest. I know it was a rush job getting it together. Ian McDonald (sadly now deceased) and myself attended a course at Chelmsford at the same time. We then deployed to RAF Wattisham to form up. Then it was by lorry convoy to Marchwood to board RFA Sir Geraint. I accompanied the S600 on the sea voyage which took a few months. Thats a story in its own right. The radar was then Chinooked from anchor in Port Stanley Harbour to be set up temporarily on Canopus Hill. Our RAF Engineers went ahead to prepare the site and the rest of the Operations Crew flew down later to join us. Later it was deployed to Mount Kent.

I fully agree with Grants statement, the MOGs organisation is a very valuable source of information for us for which we are very grateful. Were meeting with George Duncan and Mat Pryce of BAe Systems at the ADRM at the end of the month to maintain our links with the present day organisation.
Grant Grafton adds: I am still looking for a photograph, or even an artists impression, of the interior of a S259 control cabin. Otherwise very happy with all the fantastic information offered by the MOGs group.

Finally, a post-script from Dave Lowry: if any of your members would like to form a small group to visit the museum please let me know. I could easily make arrangements.