23A08: Chelmsford Innovation Marconi and Beyond

The event was well attended with over 1,000 visitors attending during the period of the exhibition. These visitors ranged over three and perhaps even four generations of not only Chelmsford residents but also from the further reaches of Essex and beyond. From a personal perspective it was heartening to see the reaction of older generations whose memories were revitalised by the exhibits, and the younger generations who viewed the exhibition in awe and wonder. 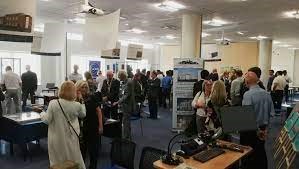 On entering the exhibition, visitors were greeted at the front desk and given an overview of the exhibition. The first exhibit was a replica of the microphone used by Dame Nellie Melba to make the historic broadcast in June 1920.

Following this were posters depicting the history of The Marconi Company starting with young Guglielmo (William or ‘Bill’ in English) in his home laboratory through to the founding of The Marconi Wireless and Telegraph Company at the Hall Street Works and beyond.
Posters hanging from the roof displayed the technological advances made through the decades, whilst underneath were artefacts of the same period.

As visitors moved around the exhibition they passed by the Chelmsford Amateur Radio Society (CARS) desk, where CARS members were willing to discuss the activities of their society.

At the tail end of the exhibit was the magnificent display of Radios through the ages, from the old valve radios to the transistor. A remarkable collection owned by Paul Green, who among others, including Tim Wander, Alan Pamphilon, Leonardo and Teledyne e2v, allowed precious artefacts and current technology to be seen and enjoyed by the public.

It also worth mentioning that during the exhibition videos were being displayed: one was an Italian made documentary; when English was spoken Italian sub-titles appeared and vice-versa, the other was of royal weddings.

This leads on indirectly to the high point of the exhibition on the 1st and 2nd July Dr Paul Marshall arrived with the camera used at the Coronation of Elizabeth II in 1953.

On the Saturday the exhibition was visited by Vicky Ford and was captured in a YouTube video at the CRHnews channel.

The Video can be viewed at https://www.youtube.com/watch?v=HBNjRNRXDcA

Thanks must go to Pam Swaby (CCS), Vicky Ford and Helen Sheen (ARU) in this video for their efforts in making this a success. 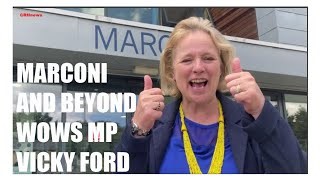 Chelmsford Science and Engineering Society also have an article on the event at
https://cses.org.uk/news/334-exhibition-celebrates-chelmsford-innovati

Personal Thought: What struck me about Marconi, Maxwell and Hertz, along with other pioneers of wireless technology, was how young they were. It made me realise that some of the most forward thinkers are the young.