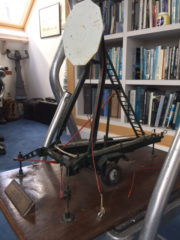 This enquiry from Stewart Waring was sent to the secretary Barry Powell in April 2017.  I intended to include it in the 2018 newsletter, but completely through oversight on my part it didn’t appear. Profuse apologies to Stewart on realising my mistake and a promise to include it in the 2019 edition. I posted the enquiry on the MOGS forum and received a number of responses which confirmed it was extremely unlikely to be radar.

I recently bought in an ‘antique’ (on reflection a bygones/bric-a-brac shop) in Grantham, Lincolnshire, a well (probably professionally) made model of a ‘6m Transportable Tropo’ A plate gives the information ‘O/all Length 5m, Stowed Height 2.3m, Weight 1500 kgms’. The aerial, a decagon (flat plate dish) is mounted on a two wheeled trailer, the wheel hubs have the Marconi logo and the trailer the number plate SEC 207P (1975). The model adjusts for rake of the aerial, stowage etc. The scale is approximately 1:13-1:15 and it is mounted on a plywood, varnished board. Over the years I noted several good and interesting models in that shop, but not interesting enough to buy. This one was, however.

Would any of your members have any knowledge of this device, was it ever built, where did the model come from? Any information you may be able to obtain will be much appreciated.

As an aside I worked with Marconi when the ill fated Comet/Nimrod AEW project was being developed, flying out of RAE Bedford.

In his reply, Barry Powell suggested that it looked like a model produced for publicity purposes by the Space and Microwave Division of Marconi’s. Subsequently some of the MOGs suggested various directions for further enquiry:-

…a polarisation changing plate and therefore whether the model contains a parabolic dish behind it? I remember examining photos of, and estimating the performance of, Russian SAM guidance systems, in which such a plate was a prominent feature. (Bernard de Neumann)

…there was work on Tropo scatter at Writtle/Guys Farm around 1959/60. (Mike Plant)
But, not one of ours at MRSL (Ken Wilkinson)

There appear to be more than likely no radar associations, rather a model for troposcatter communications equipment, confirming the abbreviation on the identity plate. A number of the MOGs suggestions were copied to Stewart, and have given me one or two leads to follow up which I’ve yet to do.

So now, can anyone among you solve this puzzle – for what kit was it a model? 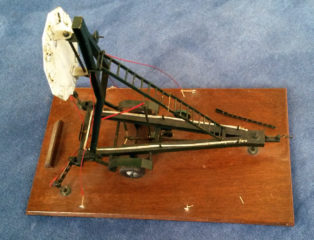 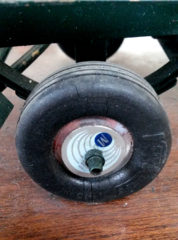