My late father spent much of his life working for Marconi in the Chelmsford area. On retirement we teased him that the company would surely collapse! 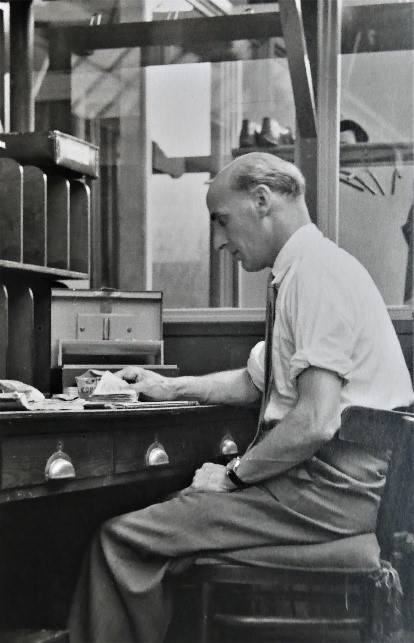 Dad was a butcher by trade but worked for the company from September 1937, returning after war service in the army, and received a 35 year certificate immediately before retiring at 65 in January 1973. He always answered to Joe Bardell at work, Sid to the family.

Life was not all plain sailing however. In 1950, working a night shift as a hot press moulder he was told to remove the safety guard in order to increase production. His hands were caught in the press and he lost his right hand index finger, taken out back to the wrist, and his two left hand middle fingers, one at the first knuckle, the other below the first knuckle. He never felt pain at the time.

Dad’s devotion to Marconi developed from the company’s aftercare. They settled out of court and he received compensation of £3500 plus damages from which he was able to buy outright a brand new three bedroom house in Braintree and a car. He was promised an office job for life and could not be made redundant. All this happened when I was a baby but my memory is of him working for Radar Division at Church Green, Broomfield.

His title was cashier but I am sure he did much more - organising hotels, air tickets and other travel arrangements. Judging by the gifts the travelling staff gave him at Christmas it seems clear that he was well regarded. It would be fair to say that his accident was one of the best things to happen to him.

Just one example of his devotion involved a rear collision to his car at traffic lights in Chelmsford. He was returning from the bank, it may have been New Street, with a large amount of wages cash in the boot and, fearing a robbery, accelerated through the red light only to be waved down by a policeman who had witnessed everything. When he opened the boot and revealed the money he was allowed to drive away; he received a commendation from the company.

On reflection I think it must have been New Street because he often said he was surrounded by huge amounts of cash in the strongroom. Dad would never gamble and put himself and the family at risk by the temptation to clear the inevitable debts!

I have my own memory of Church Green because to occupy my school summer holiday in 1964, dad took me into work for several weeks where I was given various office jobs by Bob Hefford (I think) and a few shillings pay, I suspect from dad’s own pocket. Two other Marconi people I remember, because dad tipped them off about new houses still being built near our home, were Freddie Beales, who I know died a few years ago, and Dickie Hayward, probably the most amusing person I have ever met.