There is no record of Edmund in the Commonwealth War Graves archives so it is probable that he died just after the war ended.  Edmund was born on 29 January 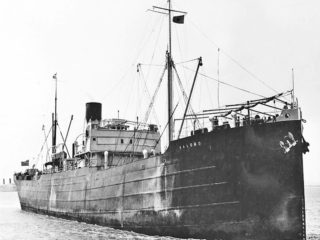 1901 at The Manor, Little Longstone in the parish of Bakewell in Derbyshire. His father’s name was Herbert Tinsley Taylor of independent means, his mother’s maiden name Broomfield. Edmund joined Pocklington School on 18 January 1913, from Bridlington Grammar when his parents were living at Shean House, Filey.  He joined Malton School on 19th September 1916 and left one month after his 16 birthday on 23 February 1917 to train as a wireless telegrapher.

At the time his father, still of independent means, was living at 58, Florence Terrace, New Biggin, Malton. The July 1918 school magazine records that Eric Fuller and Edmund Taylor have passed their 1st Class Wireless Examination and were home for a brief rest.  In the December 1918 issue it was confirmed that Edmund had died at sea from influenza* on board the SS Kalomo, adding in the LATE PRESS ‘It is with great regret that we have to record the death at sea, from influenza, of Edmund Taylor, who though only with us for a short time, did much that was good for us. We wish to offer our deep sympathy with his parents.’

SS Kalomo (see photo) was completed in 1907 by Robert Duncan & Co, Port Glasgow, for the Bucknall Steamship Lines Ltd, London. She was re-registered in 1914 to Ellerman & Bucknall (Steamships) Co Ltd, London when a controlling interest in the Bucknall shipping line was sold to John Ellerman. She was broken up on 8 November 1931 by TW Ward Ltd at Inverkeithing after being renamed City of Halifax in 1926.

*The H1N1 influenza pandemic of 1918 – 1919 was deadly.  It infected 500 million people across the world including remote Pacific islands and the Arctic, and resulted in the deaths of 50 to 100 million (three to five percent of the world’s population), making it one of the deadliest natural disasters in human history.

Most influenza outbreaks disproportionately kill juvenile, elderly, or already weakened patients; in contrast, the 1918 pandemic predominantly killed previously healthy young adults.  The majority of deaths were from bacterial pneumonia, a common secondary infection associated with influenza, but the virus also killed people directly, by causing massive haemorrhages and oedema in the lung.  The incubation period for the disease is some 2 to 5 days and death can follow in hours or a few days from the first symptoms appearing.

The text of the announcement at bottom right of poster reads: 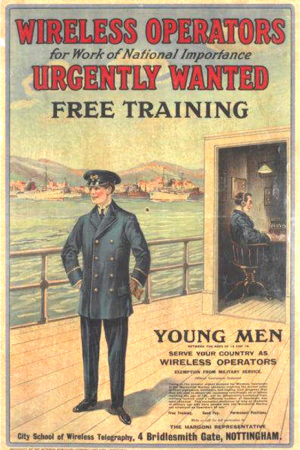 YOUNG MEN
BETWEEN THE AGES OF 16 AND 18
SERVE YOUR COUNTRY AS
WIRELESS OPERATORS
EXEMPTION FROM MILITARY SERVICE
Official Government Statement.

‘Owing to the present urgent demand for Wireless Operators in the Mercantile Marine, students entering the school prior to their eighteenth birthdays, and making such progress that they are able to obtain the necessary certificates on or before reaching the age of 18¼, will be temporarily exempted from military service until a sufficient number of Operators has been obtained. This exemption continues so long as students of military age who have passed into the Mercantile Marine are employed as Operators at sea.’