He joined Marconi in 1943. He was also the President of the Marconi Veterans Society in 2007.

Marconi was a very big part of Roy’s life. In his youth he spent a lot of time building radios in the loft of his father’s garage business, which no doubt helped him with his application for a job in the Research Division of Marconi’s Wireless and Telegraph Company at Baddow in 1943. After developing special receivers for direction finding, he became a founder member of a department established to develop radar systems in 1949. He held many positions in the organisation and had responsibilities for project management, design, manufacturing and installation of various radar systems.

In 1965 he became Technical Manager of Radar Division, and then Technical and Quality Director of Marconi Radar Systems in 1969. In 1973 he was given the addition role of General Manager for Chelmsford when there were about 3,500 employees. In 1974 he was given responsibility for Health and Safety, and in 1976 after a major reorganisation he became responsible for all MRSL development and production in Chelmsford, Leicester and Gateshead. Further reorganisations followed, but he retained his role as Technical Director until he retired from MRSL in 1986.

After leaving MRSL he worked with the GEC Technical Directorate and the Canadian Marconi Company, and also with several Universities structuring courses, lecturing and examining. He became a visiting Professor at Sussex University in 1996.

Throughout his career he was very active with the IEE and the Engineering Council, and supported many Marconi engineers with their membership applications.

He researched the history of Marconi and the Marconi Company, and presented an IEE lecture entitled “Marconi the Father of Wireless” which he repeated many times at several different venues.

Most recently he provided background material to support the listing of the Chain Home tower at Baddow.

Strangely in 2017 I finished my career in Radar in A Block in Baddow in more or less the same area where my father started his in 1943.

The photograph below was taken in the field at Baddow around 1950 which I found in an envelope containing old negatives. It shows Roy sitting in the doorway of a wartime communications cabin with some of his close colleagues (Len Whitaker, Joan Parker (later Joan Whitaker), and Jean Lelivre (I’m not sure of the spelling, but I understand that she was also known as Jean “the book”)). 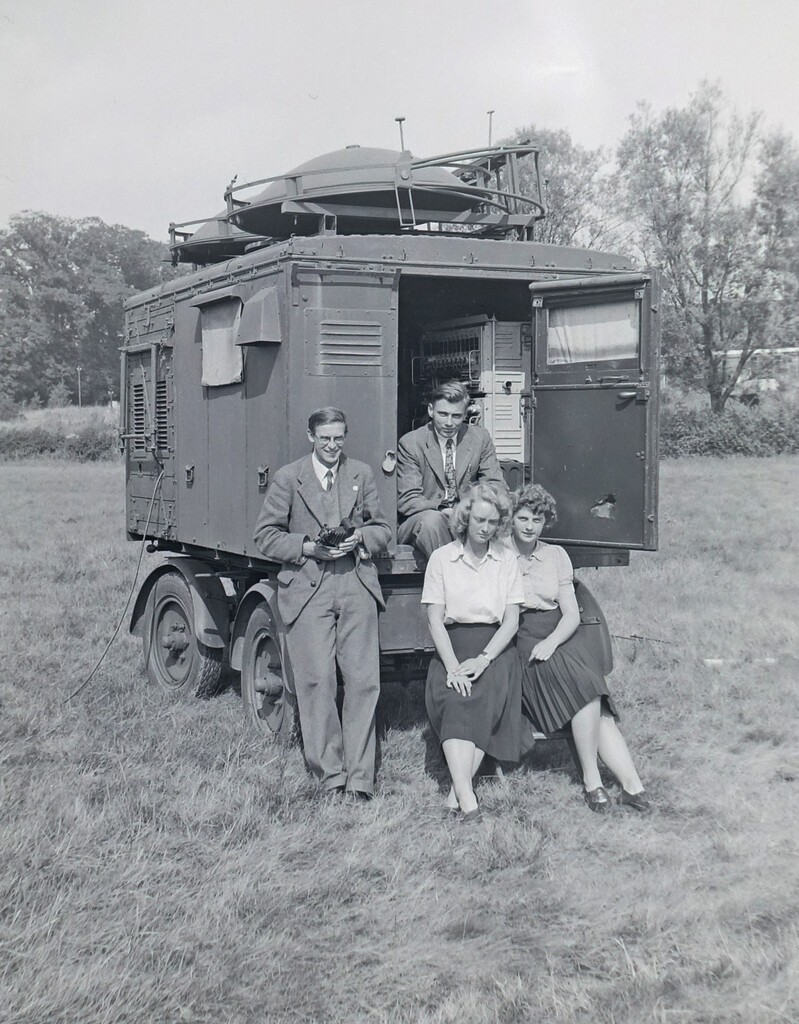